OpenWRT Configuration for a Public /29 Subnet

This report on configuring an OpenWRT router aims to address a gap in the existing documentation. I am no networking expert and I have been learning OpenWRT along the way, but I do understand the OSI model, TCP/IP, CIDR notation, Linux Netfilter, and the essentials of network design. OpenWRT documentation describes the specifics of the firmware and how to use it in sub-enterprise environments, but I could not find end-to-end guidance for the only slightly more complicated full solution I was planning:

While I had set up similar networks on DD-WRT using iptables directly, little of this experience was transferable. This is because OpenWRT employs its own abstraction layers that are best not resisted. Besides, the task is inherently complex; while doing my research, I ran across Cisco-trained engineers struggling with the very same questions in their own world. (Possibly they were not the sharpest knives in the Cisco box, but who am I to judge?)

My router is a Turris Omnia. Pricey but good. As a project of the Czech Internet authority, it is better supported and more hacker-friendly than any commercial router I'm aware of. It contains three network interfaces – one for the WAN and two available to the internal switch. It runs OpenWRT and offers automatic updates. Best of all, in my experience, it comes with the Btrfs file system installed, which allows snapshots and back-ups through its Schnapps utility.

My network is a /29 subnet comprised of eight contiguous IP addresses. Deducting the [unusable] network address, the gateway address, and the broadcast address, I have five addresses available for use. One, of course, is the router's IP address.

In the sections that follow, I will work through all the levels of configuration, from hardware to firewall. I used the LuCi graphical interface intermittently, but mostly I'll refer to the two text configuration files that define most of the network configuration for OpenWRT:

At the end, I provide the complete (sanitized) text of the finished files from my working system.

The illustration below is based on the official Turris Omnia architectural diagram, modified to show my particular setup. Here is a key to the hardware: 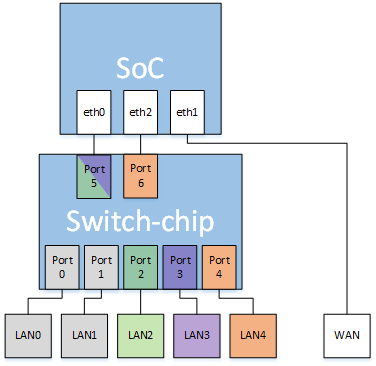 Connection paths inside Switch-chip are programmable. This allows mutually isolated virtual LANs (VLANs) to be defined for each of my discrete services:

With help from Configuring internal VLANs - Omnia, I defined the VLANs as follows in /etc/config/network:

Server hosts x.x.x.229 and x.x.x.230, both alone on their respective VLANs, share eth0 / port 5 for access to the Internet. The "5t" in VLAN2 and VLAN3 means that switch port 5 is shared by two traffic streams, which are distinguished by tagging the packets with destination headers. This tagging setup can be configured "intuitively" in LuCi, but I find it easier to understand in the bare text configuration.

Meanwhile, the eth2 / port 6 pair carries all of the traffic passing in or out of the LAN.

I had a lot of trouble figuring out the interfaces. In a normal configuration, with one public IP address, there is a single WAN interface and a single LAN behind it. With a /29 or other exotic subnet, that original WAN is still there, but additional WAN interfaces must also be defined. The OpenWRT documentation Using multiple public IPs on wan interface shows how to do this.

The additional interfaces are not quite the equals of the original WAN, which has the IP of the router itself. Once I had everything set up and working, I did speed tests between various interfaces and found that the latency increase across (for example) WAN and WAN_229 is just as big as that between WAN_229 and DMZ_229. In other words, there is NAT happening behind the scenes for those extra public IPs, and that means this whole design has double-NATing built into it. I found that you can also assign a public IP directly to a host plugged into a router LAN port, but then you have a true old-style DMZ without any firewalling, and that is not what I want. Thus the cost of convenient firewalling to protect a server host is double NAT.

Experiment proved that the original and subsidiary WAN interfaces all need to use the same public gateway – x.x.x.225 – and their associated respective DMZs networks use it, too. The hosts residing in those internal networks, however, use gateways specific to their networks, as shown in the /etc/config/network configuration blocks:

The final mystery of configuring this router lay in the firewall. OpenWRT's firewall is built around zones and forwards betweens, but I don't really understand the behaviors that I observed through experiment. A zone was configured by default for the LAN and WAN, so I configured corresponding zones for my four new interfaces. The key is to assign the right network to the right zone.

What is less clear is what the optimal input/output/forward settings should be. I started out by setting everything to ACCEPT so that at least everything would work, and then backed away from that by progressively resetting parameters to DROP until something broke. As it turns out, almost nothing here needs to be accepting packets.

Here is the minimal configuration that worked, anyway.

I used LuCi set up zone forwards since it was relatively intuitive, and again pared away the forwards that turned out not to be needed. Below are the surviving blocks in /etc/config/firewall, all of them for outbound traffic.

And finally, the firewall redirects. My starting point was again the OpenWRT documentation Using multiple public IPs on wan interface. That example prescribes one SNAT block and one unrestricted DNAT block for each of the extra public IPs.

The SNAT blocks provide IP masquerading, so that outgoing packets identify themselves as coming from a non-default public address (with the default being x.x.x.226). The DNAT blocks redirect traffic to internal hosts based on the public IP destinations they carry. I have three internal networks, not one, so the src_dip and src_ip options route the packets as needed. I dropped the lines option src 'lan' from each SNAT block because they made no sense in the new context and turned out to be unnecessary. The option dest 'wan' lines really are needed.

I dropped entirely the wide-open DNAT blocks in the example, substituting port-specific redirects that I worked out through LuCi, which has pretty intuitive descriptive language for these rules, at least once you get one right the first time.

These are the configuration files that I ended up with. I do not doubt that lint remains to be gathered, to say nothing of bad ideas. Maybe someone can suggest improvements.

Table 1.7. A sanitized version of the final product