Part 1: Setting Up SDR to Capture Data from the Ambient Weather WS-2902A

This project assumes that you have familiarity with the Linux command line, basic knowledge of Git, an extremely basic knowledge of electrical circuits and soldering, and an obsessive interest in your local weather. The hardware and software that I used represent just one of countless possible configurations, but I thought my experience as a beginner with some of these technologies and my solutions to problems that I encountered might be useful to others. I began with three goals that had different priorities at different times:

I accomplished all of these things and also learned that my immediate vicinity is home to a Citroën automobile that has radio-enabled tire-pressure sensors, that one of my neighbors has a fancy and talkative smart refrigerator, and that the construction site across the street has equipment announcing its oil pressure to the world. I had to modify the SDR software driver for my weather station's instrument cluster when it turned out to be unsupported by the WeeWX weather system, the weather-data server that I used. And I discovered that information about amateur meteorology and Raspberry Pi hacking and SDR is something of a maze, which motivated me to record the path I found through it.

Some notes before starting.

Here are some conventions and observations that will be useful when working through this guide.

Part 1: Setting Up SDR to Capture Data from the Ambient Weather WS-2902A

My weather station kit, the Ambient Weather WS-2902A, was purchased from Amazon. Marketed by Ambient Weather of Chandler, Arizona, USA, the kit includes an outdoor "Osprey" sensor array and a non-touch tablet console. The console measures indoor temperature, humidity, and barometric pressure. The console receives weather data by radio from the outdoor sensor, and can also connect over Wi-Fi to the Internet, allowing data to be relayed to amateur weather websites such as Weather Underground.

(Photo from the Ambient website, complete with the bad AI-generated hand.)

The sensor array is a WH65B, manufactured by Fine Offset Electronics in Shenzen, China. The same label is slapped on multiple products that have slightly different firmware. Mine broadcasts the name Fineoffset-WH65B, differing from others in spelling and punctuation. Power is from two AA batteries (3V). The array broadcasts data at 915 MHz with a nominal range of 300 feet. This signal is meant for the console, but in this project, I also intercept it using an SDR dongle connected to a Raspberry Pi 3B+. Broadcast data includes the following weather information:

Conspicuously absent from this list is barometric pressure, which, as noted above, is detected by a sensor housed in the tablet. The difficulty of capturing pressure along with the other readings led to Part 2 of this project.

Since I was new to the world of Raspberry Pi hacking, I bought a complete Raspberry Pi 3B+ kit from Canakit. This came with a breadboard, a GPIO-to-interface IO board, miscellaneous jumper wires, an old-style IDE ribbon cable, a plastic case for the Pi, and a package of switches and LEDs good for experimenting with Blinkenlichten.

I selected Raspbian as the operating system for the Pi because I am a Debian GNU-Linux user and because it was pre-installed as an option on the SD-card from Canakit. I won't go into detailed instructions for setting up a Pi+Raspbian, since that information is readily available on the Web. The quickstart instructions included in the kit were all I needed to arrive at a familiar Debian-like environment. After network setup (including SSH configuration), user configuration, updating, and so on, use apt to install python2, python-dev, python-smbus, git, build-essential, cmake, libusb-1.0-0-dev, sqlite3, apache2, and any dependencies those pull in.

I bought a NooElec NESDR Smart v4 radio dongle as part of a kit that included three different types of antenna. The device plugs into one of the Pi's USB ports.[1] 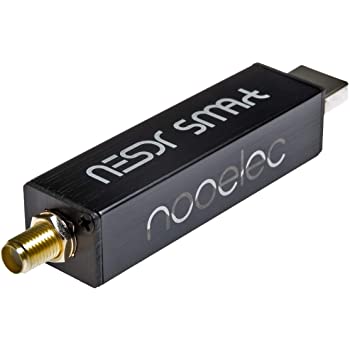 The 4.5" UHF antenna (included in the kit) worked well at the desired 915 MHz frequency.

RTL-SDR is a package of libraries and utilities to control a RTL2832U-based DVB-T/DAB+/FM USB dongle. This software is required as a bridge between the digitized output of the RTL2832U chip and a decoding utility, rtl_433, that can extract data understood by WeeWX. According to the project site,

The rtl-sdr codebase contains a basic FM receiver program that operates from the command line. The rtl_fm program is a command line tool that can initialize the RTL2832, tune to a given frequency, and output the received audio to a file or pipe the output to command line audio players such as the alsa aplay or the sox play commands. There is also the rtl_sdr program that will output the raw I-Q data to a file for more basic analysis.[2]

RTL_433 is a powerful SDR utility that can decode all kinds of transmissions from devices broadcasting in the ISM band, which is reserved for "industrial, scientific and medical (ISM) purposes other than telecommunications."[4](That's how I picked up the smart refrigerator and the rest.) The name comes from the standard ISM frequency 433.92 MHz, but it can tune to any frequency supported by the hardware, including 915 MHz, the frequency that my outdoor sensor cluster transmits on.[5]

WeeWX calls RTL_433 to obtain SDR sensor data. It's not in the Raspbian repositories, so we clone it using Git.

I installed WeeWX using the project site's instructions for Raspbian, WeeWX: Installation on Debian-based systems. I'll reproduce the steps here for completeness and so I can comment.

Procedure 1.2. To install WeeWX on the Pi

The WeeWX SDR Adapter parses data received from rtl_433, determining the weather station device type and packaging the weather data in a format that WeeWX can process.

This subtask took me as much time as everything else put together because it involved writing a new parser for my outdoor instrument cluster. This was a surprise, because the WeeWX SDR Adapter already contains a class to parse a WH65B cluster, and I knew this before I bought the weather station kit. As it turns out, there is more than one flavor of WH65B, and each flavor has its own distinct firmware bearing its own unique device ID string.

Looking at the adapter code, I saw that the ID string is used to identify the device and assign the appropriate mapping between device data fields and WeeWX data fields. I first tried hacking the device ID in the code to match my WH65B's string ("Fineoffset-WH65B"). This partly worked, and WeeWX began receiving data, but many of the data fields were wrong or empty. I realized that it wasn't just device IDs that were different, but also the names of the device data fields. This meant that I needed a whole new mapping, which meant creating a new parser class (FOWH65BAltPacket) and adding it to the adapter.

Creating such a mapping turned out to be straightforward. Raw output from rtl_433 revealed the device data field names, and with help from the WeeWX Customization Guide and by studying the existing classes in the adapter code, I came up with a mapping that worked.

After modifying the code on my Pi to fit my needs, I submitted a pull request to the adapter developer in hopes that the new device can be added to the official code. In the instructions that follow, I use my fork of the WeeWX SDR Adapter. I'll update this if the pull request is merged.

The following procedure is based on the developer instructions for weewx-sdr, modified to use my fork of the project, weewx-sdr-jds. If you aren't using my fork, consult the original instructions.

If everything is working, you should start seeing output like this in /var/log/syslog:

After 10 minutes, you should see weather data being reported at your Pi's Web address. The WeeWX default URL is http://[IP address]/weewx/.

To summarize, here is a reference to all of the files involved in running the SDR dongle with WeeWX. Note that this is the outcome of my decisions to either load packages from apt repositories or to clone them to Git and load them from there manually or from an install script. In particular, I didn't like the file locations resulting from an Git installation of WeeWX, so I used apt.

Since had I planned to capture data from the radio signal alone, the lack of a barometer in the sensor array was a problem. I solved this by purchasing a $5 BMP180 sensor board (just 37¢ from AliExpress but I was in a hurry), originally manufactured by Bosch. This can be connected directly to the Pi's motherboard (via pins that you have to solder on, which come with it), and it offers an adventure in harvesting data from two separate sources and source types. The BMP180 measures barometric pressure, temperature, and altitude. I only cared about the pressure.[6] 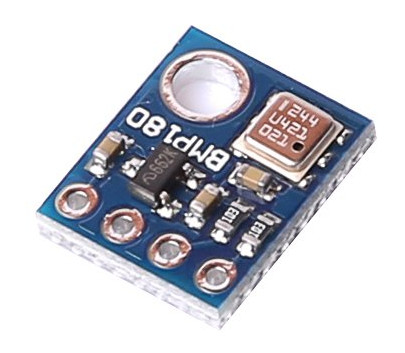 The number of pins for the BMP180 varies. Mine has four:

We will be connecting the BMP180 board to the Pi using its general-purpose input-output (GPIO) header, a two-row array of 40 pins. First, though, Raspbian must be configured to recognize the GPIO interface.[7]

Procedure 1.4. To enable the GPIO interface

After rebooting, lsmod should find one or more i2c modules:

Connecting the BMP180 to the Pi

The pin array of the Pi's GPIO header matches a standard IDE cable. IDE cables such as the one in my kit are keyed both on the plugs at each end and with a red stripe on one side of the ribbon to identify the wire for Pin #1. This is so that you don't connect them backwards. Unfortunately, the Pi's header is not keyed. As a result, it's necessary to use the following diagram showing the location of Pin #1 on the GPIO header. It's also handy to know that Pin #1 corresponds to the sensor's VIN pin, Pin #3 to SDA, Pin #5 to SCL, and that either Pin #6 or #9 will match GND.[8] 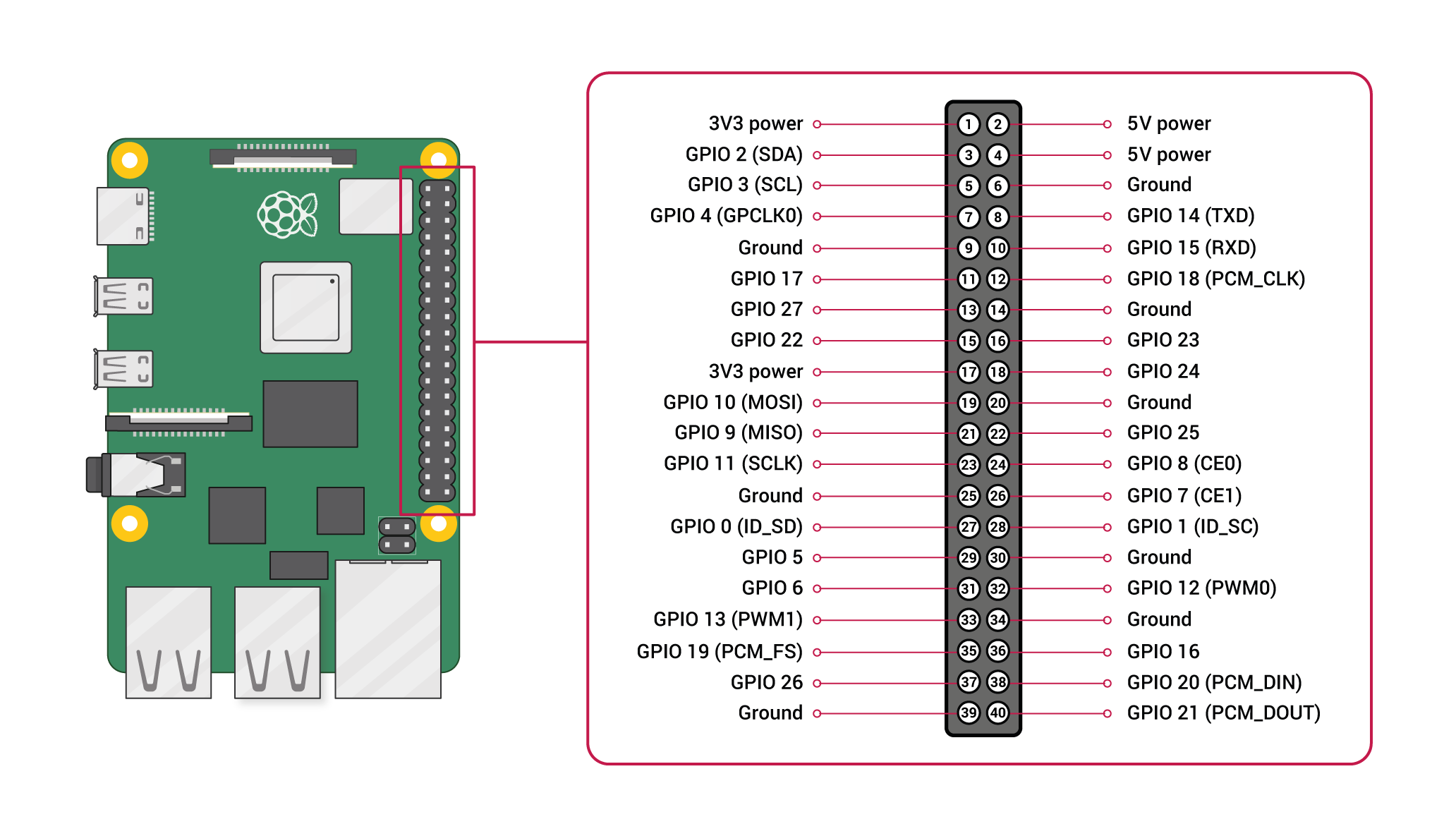 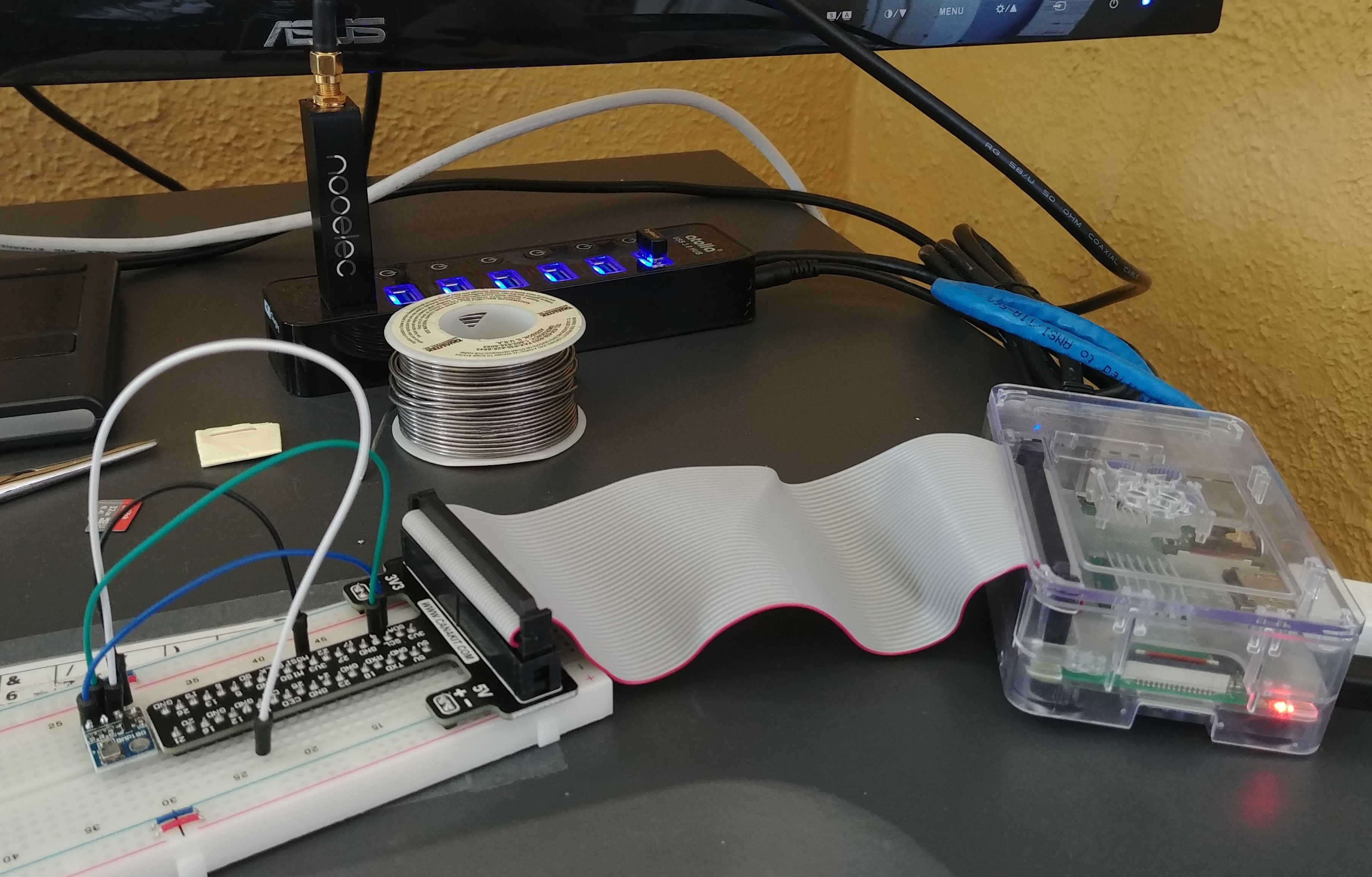 At this point, you can test if the interface works and the BMP180 sensor is detected. In a terminal, run i2cdetect as shown:

The output shows that the interface works and that the sensor is detected as device 0x77.

Adafruit Industries is the source for Raspberry Pi libraries that support devices like the BMP180. The library I used has been deprecated because this sensor has been around for a while, and other libraries have been written for more advanced sensors. However, there is nothing wrong with the BMP180 if all you want is pressure, and the price is right. This is also the device best supported in WeeWX. You can ignore the deprecation notices.[9]

Installation of the Adafruit BMP180 library also pulls in two dependencies, Adafruit GPIO and Adafruit PureIO. The GPIO already works without these, but the BMP180 won't.

Procedure 1.5. To install the libraries

Next we need to collect the BMP180 output and pass it to the WeeWX engine. The WeeWX Extra Sensors Adapter does this. This adapter actually supports two sensors, the BMP180 and a temperature/humidity sensor called the DHT22. The instructions say it "requires" the DHT22, but that's not true; what it requires (by default) is the DHT22 library from Adafruit. More on this below.[10]

To summarize once again, here are files added or changed to support the BMP180 sensor.

Once the prototype hardware assembly was confirmed to be working, I made a wiring harness from an old CDROM audio cable. Its four-pin connector perfectly matched the pins on the sensor, and I cannibalized the pins on one end to fill out the empty pin slots on the other end. The pins attaching to the GPIO came from the Pi kit. Now the BMP180 could be installed more compactly, as shown: 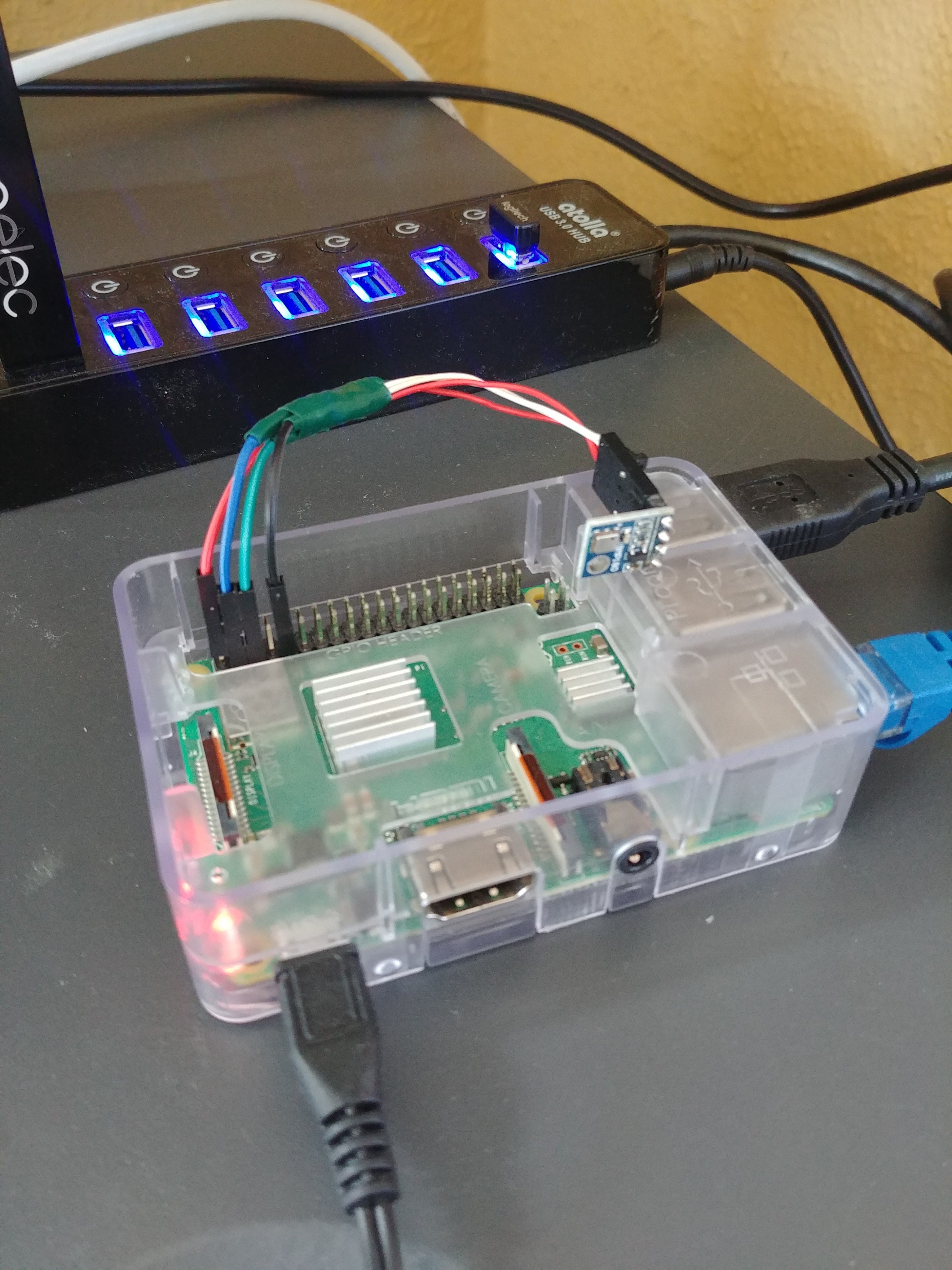 [7] I followed the Adafruit GPIO tutorial at https://learn.adafruit.com/adafruits-raspberry-pi-lesson-4-gpio-setup/configuring-i2c.

[9] The complete Adafruit tutorial for using this library is available at https://learn.adafruit.com/using-the-bmp085-with-raspberry-pi/using-the-adafruit-bmp-python-library.

[10] See the developer's instruction at https://github.com/eyesnz/weewx_pi_sensors.